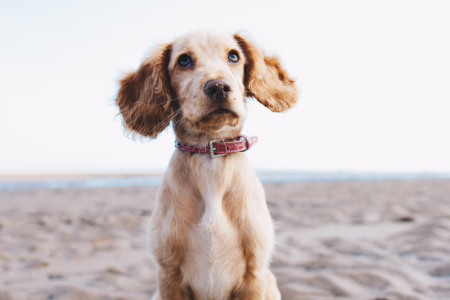 All dog lovers know that dogs’ personalities are as varied and pronounced as the people who own them – but what are they trying to tell us? How can we make sure we’re addressing their needs and respecting their feelings? If you pay attention to your dog’s behavior, there are a few tell-tale signs to help you “speak dog” and understand what your furry friend is thinking. Here are five indicators you can follow to help read your dog’s body language.

We can understand a lot from just the tail. If a dog is wagging his tail slowly, that usually means he doesn’t understand what’s going on and is waiting for you to give direction. If he is waving it low and fast, he’s likely letting you know that you are in authority. However, if his tail is raised and it tremors, that means that he thinks he is in authority over the situation. If the tail is tucked between his legs, then he believes he is not safe or feels uncomfortable or anxious.

Another way to understand what our dogs are thinking is to watch for signs through their eyes. When their eyes are trained on you, they probably want your attention and expect you to do something about it. If your dog is squinting and blinking, then he might just want to play. If the squinting looks painful, something could be wrong with his eyes and he should be taken to a veterinarian as soon as possible.

The ears can come into play as well when determining your dog’s thoughts and feelings. Ears held high and forward generally mean that they are listening and are curious to what’s happening. If the ears are held down, that could mean that they’re confused and possibly scared. This usually happens in unfamiliar environments or with unfamiliar people.

Just like with people, dogs’ facial expressions and gestures can help identify what they’re going through. If your dog is yawning, then that could mean they’re crabby and agitated.  When a dog licks his face, he’s saying that he’s stressed or possibly senses danger. When showing off their teeth, they want to protect their territory and show who is boss. Dogs often do this while eating when around another dog (because who likes someone else to dig into your food?).

The stance of your dog is another way to understand what he’s trying to say to you. If a dog is rolling over and showing you his belly, then he is showing you that he trusts you and wants to make you happy. Rubbing his belly is a great way to show that you love him! If a dog puts their head on your knee, then they want your attention. Sometimes dogs put their paws on your knee as well – this means that they’re trying to dominate you. If your dog has one paw raised, this means that they are usually hungry or are asking you for something.  They might whine or point you toward what they want. If a dog turns their back to you, this means that they are being vulnerable and trust you. Dogs may also shake occasionally to relieve stress.

Being able to read your dog’s body language and knowing what your dog is saying is an important part of pet care. It can help you become a better owner by taking care of them and giving them what they ask for. Every dog is different, so pay attention to your dog’s unique way of speaking and make a note of recurring behaviors. The best way to show your pup that you love them is by listening to them!